Sudoku is an easy to learn logic-based number placement puzzle. The word Sudoku is short for Su-ji wa dokushin ni kagiru which means "the numbers must be single".

The roots of the Sudoku puzzle are in the Switzerland. Leonhard Euler created "carré latin" in the 18h century which is similar to a Sudoku puzzle but without the additional constraint on the contents of individual regions. The first real Sudoku was published in 1979 and was invented by Howard Garns, an American architect.

The real world wide popularity started in Japan in 1986 after it was published and given the name Sudoku by Nikoli. 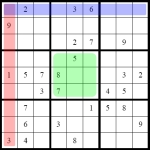 A Sudoku puzzle consists of 81 cells which are divided into nine columns, rows and regions. The task is now to place the numbers from 1 to 9 into the empty cells in such a way that in every row, column and 3×3 region each number appears only once.

A Sudoku has at least 17 given numbers but normally there are 22 to 30.

A Sudoku is a logic-based and not a math-based puzzle. It is possible to make und solve a Sudoku puzzle with letters or even some symbols.

How to solve a Sudoku (Example)

First of all, this is a guide for absolute beginners. I know there are better and/or more elegant ways to solve a Sudoku, but I only tried to write a little overview and not the ultimate Sudoku guide.