What is Samurai Sudoku? 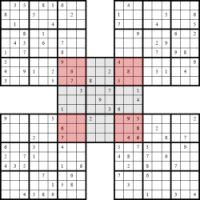 Samurai Sudoku (often only referred to as Samurai or Gattai-5) are a partial overlapping arrangement of five standard Sudokus. The four corner Sudokus are arranged around a central Sudoku, in such a way that each of the four corner Sudokus shares a block with the Central Sudoku. This creates an x-shaped figure with a total of 369 cells, which are distributed over 41 blocks.

The individual Sudokus, in particular the central Sudoku are usually a bit easier to solve, since the blocks, which two Sudokus are sharing can be more easily completed.

Other variants combine eight (Gattai-8), thirteen (Gattai-13) or more Sudokus. These variants are also known as Monster Samurai. Furthermore there are Samurai Sudokus which combine different Sudoku variants together.

Each of these five Sudokus can be solved without considering the other Sudokus (at least for the Samurai Sudokus on this website). A good point to start a Samurai Sudoku is the central Sudoku, because the four corner blocks of the central Sudoku are located in two Sudokus. Because of this one can complete these blocks easier. The individual Sudokus are otherwise solved similar to a normal Sudoku.